We drove from Yosemite National Park to Kings Canyon & Sequoia NP. The drive was about 4 hours long but luckily traffic wasn’t too bad. Along the way we made a stop for some delicious Mexican food at Don Pepe Taqueria in Fresno. Our cabin was very cute and well furnished but we had opted for non-heated cabin. We thought, we’re from NY so the cold shouldn’t bother us too much. Unfortunately, the temperatures dropped to low 40° F at night (we visited in May). I don’t think I’ve ever slept with so many layers in my life and hopefully I’ll never have to do it again.

The next day, after breakfast and some hot coffee, we went on the General Grant Tree Trail. It’s a short, easy loop surrounded by so many giant Sequoia trees. These trees are so HUGE that I felt like I was in some fairy tale and it reminded me of the trees from Lord of the Ring. Some of the trees like the Tennessee Tree have burn marks and large cavities in the trunk but the tree is still alive and growing. As long as there is enough live tissue, these giants continue to grow. In fact, fire is important for their survival and their bark is resistant to fire. Fire creates opening on the forest floor, sterilizes the soil, kills insects, fungi and other harmful things. Heat from the fire also dries out the sequoia cones and spreads the seed so new sequoia trees can grow. Depending on the sunlight and water, these giants can grow three feet per year. On average, sequoia trees are about 250 feet tall!

General Grant Tree is the 3rd largest tree and has the largest base diameter of a little over 40 feet. The diameter of General Grant Tree is 3.5 times larger than the diameter of the world’s largest tree, General Sherman Tree. Some mind-boggling statistics listed near the Grant Tree are: it’s as tall as a 27 story building, the base is wider than 3 lane highway, and it weighs more than 700 large cars. The tree is almost 2,000 years old! That’s hundreds of years before Columbus discovered America. President Coolidge proclaimed it “the Nation’s Christmas Tree”. In 1956, President Eisenhower named it Grant Tree in memory of Americans who died in the Civil War.

As I was walking, I noticed many of the trees were joined together at the root. When two seedlings start growing close to each other, the space between them shrinks until they finally merge together. They start to share the limited space, nutrients in the soil, sunlight, and water. These trees are most likely the same age. We were there on a very foggy and slightly chilly day which made the whole experience even more magical. At times, we couldn’t even see the top of the trees. On the trail you also see the cabin built in 1872 by the Gamlin brothers. (To me, the cabin looked like the one from Little Red Riding Hood.) The Gamlin cabin has since been moved and reconstructed 3 times. Over the years it has served many purposes like hay and grain storage for US Cavalry, museum, ranger station and residence for the first civilian ranger named Lewis L Davis. Now, it’s part of the Grant Grove Trail and you can look inside but there isn’t much to see. It’s an empty cabin but it adds to the mysterious and magical element while walking among such giants.

In the late 1800s, when people from California talked about these huge, tall sequoia trees no one in the east coast believed them. In 1875 two brothers wanted to make money by 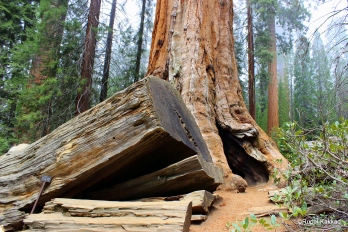 exhibiting a section of the sequoia tree at America’s Centennial Exhibition in Phillidelphia. They hired two guys to cut down a Sequoia tree. These guys worked for 9 days and were paid $50 for their effort. The 16 foot section was sliced and cut into smaller portions to be transported across country. At the exposition, people could see the lines where sections were reattached so no one believed it was the actual size. Everyone laughed at it and called it the “California Hoax”. The Centennial stump that was left at the park became known as the “School Stump” because Sunday School classes were held there.

When a sequoia tree falls, it can be used as shelter. The Fallen Monarch is a perfect example. It toppled centuries ago but in more than 100 years, the wood has decayed very little. The Gamblin brothers stayed in the Fallen Monarch while they built their cabin. It was a hotel and saloon at one point, and the US Cavalry used it as a stable for their 32 horses. There is a hole in the “roof” of the Fallen Monarch which served as a chimney.

By the time we got done with the General Grant Tree Trail, a 1-hour guided tour called Saunter in the Sequoia with John Muir was about to start at the North Grove Trail head. This was definitely one of the best and most memorable experiences on this trip. The tour was given by a volunteer ranger dressed as John Muir and he put on a great Scottish accent to take you back in time. Sequoias naturally grow only on the western slope of the Sierra Nevada mountains between

5,000 to 7,000 feet elevation. John Muir talks about other animals, small and large, that live in the park, what plants are edible, how to tell the difference between the trunks of Pine tree and Sequoia trees (sequoia bark are fibrous and soft whereas pine trees are hard). He also talks about the life of Sequoia trees and a little bit about the history of the park itself. One of the things that help Sequoias be fire resistant is the large amount of tannin it produces. For one hour you get lost in John Muir’s world. The tour ends near an open field where aspirin grass

The General Sherman is part of the Sequoia National Park and the drive took us over half an hour. It’s a beautiful drive through the mountains and by the time you get to the parking lot, you’re at about 7,000 feet elevation. The hike to the General Sherman tree is only half mile but since the air is thinner at this elevation, taking frequent breaks is strongly recommended when going uphill. In summer, there is

a free shuttle offered if you don’t want to climb uphill. General Sherman tree has the greatest mass of any tree in the world. The unique thing about the General Sherman tree is that it’s top is dead so the tree doesn’t get any taller. It stopped getting taller at 275 feet but the trunk keeps getting wider, making it the largest tree still alive. Each year, the trunk grows enough new wood to equal a large tree of any other species. When you look at the tree, it doesn’t look very tall compared to the other trees in the area but it’s trunk is very wide. You have to make a circle around the trunk to grasp just how wide it is! The General Sherman loop is only about half a mile but if you are looking for a longer hike, you can continue on to The Congress Trail (2 mile loop) that starts at the General Sherman Tree. I wanted to continue on this trail but we had dinner reservation at Wuksachi Lodge.

We picked Wuksachi lodge for dinner because there was a guided stargazing tour starting at the lodge that night at 9 pm. Prior to making the 7:30 pm dinner reservation, we confirmed with the restaurant that we won’t be late for the tour. They said an hour and half will be plenty of time for dinner and we’ll definitely make it for the tour. It seems the restaurant couldn’t be more wrong about how glacially slow their service really is. By the time we got the menu and placed the order, it was already around 8:15 pm. We politely reminded the waitress about the stargazing tour we’d signed up for but the staff couldn’t care less. The tour had started long before we even got our dinner. The restaurant wasn’t busy nor were they short staffed. By the time we got our check, the tour had ended. We decided to just drive back to our non-heated cabin and sleep. We had a long drive back to San Francisco the next day.

one of the edible plants

The entire Mexico trip plan was to walk until we g

One of our first meals in Mexico City was at Azul

We visited a textile shop in Oaxaca. They use trad

Even the hamburger from a random street stall is s

One evening in CDMX, we decided to watch Lucas Lib

I've said it before and I'll say it again. There's

El Tule is the widest tree in the world. It's over

Whatever you want you'll find at Benito Juarez mer

Oaxaca is such a cute little town. #oaxaca #oaxa

We were hoping to spend the day on #ourwawar but i

Fall colors this last weekend in the Hudson Valley