First off, one and half day in Skye was not nearly enough. That’s all the time we spent in Skye but I wish I had spent 3-4 more days here instead of Edinburgh. Isle of Skye is one of the most beautiful and magical place I’ve visited. Everywhere you look, you are surrounded by serene, peaceful, almost magical world and I did not want to leave so soon. Second, we stayed at Duisdale House Hotel and while it was a wonderful hotel with amazing breakfast (tip: if salmon is on the menu, get it! Scotland has some of the best Salmon I’ve ever tasted), the location was not at all convenient. It was far from most of the places we wanted to visit and the drive was long. Beautiful, but longer than what I preferred. After the drive through the Scottish Highlands the day before, I wanted to spend less time in the car and more time walking/hiking around Skye. My recommendation would be to stay in Portree.

This was the first hike we went on. The drive from Duisdale House Hotel to Storr was about an hour long and by the time we got to the parking lot, all the spots were taken. There were many people who had parked on the side of the road making sure to not block the traffic so that’s what we did. The hike was moderate in difficulty. The Old Man of Storr is a large rocky peak that can be seen from miles away. The hike has the same path going up and down so you’ll get back to your car. The hike to and from the parking lot is just under 2.5 miles (3.8 km) and can be done easily in one morning, depending on how many stops you make. One thing to keep in mind is there are no facilities on this trail so make sure to take water and snacks along with you. There are also no bathrooms on the hike.

If you are going in summer like I did, than expect it to be crowded. I think early morning is probably the best time to go, before it gets busy. We didn’t have too much food on us so we decided to go back after reaching about half way to Storr. We turned around just before the gravel part of the hike starts. The hike itself wasn’t relatively easy and offered beautiful views but the disappointing thing was the abundant trash on the sides. It was also very windy so definitely take a wind breaker. It’s supposed to rain a lot in Scotland but luckily for the day and a half we were in Skye, it was a warm and sunny the entire time. Old Man of Storr hike was a great way to start the day and work up an appetite for lunch.

After lunch at Uig Hotel, we went to Fairy Glen (also known as Faerie Glen). Now, I cannot stress enough just how amazing and magical this place is! If you are anywhere in Skye, this is a MUST visit. There are no signs on the road so it can be a little hard to find but it’s totally worth the effort. I suggest downloading google maps of Isle of Skye since data in Scotland is very unreliable. The drive to Fairy Glen involves a very narrow road, just wide enough for one car so if you see an on coming car than pull off to the side so the other car can pass. It is a fascinating place with otherworldly feel.

It is not one of the most popular places in Skye but it is definitely the most amazing and peaceful place. It really looks like fairies are hiding around. As soon as you get there it feels like you’ve entered another world, a magical world. There are rolling hills as far as the eye can see and a stream near by. You suddenly get a burst of energy and feel like a kid again. All you want to do is run around bare foot or just frolic without a care in the world. We hadn’t planed on spending too much time here but ended up staying here almost 2 hours because we just didn’t feel like leaving the magical world. 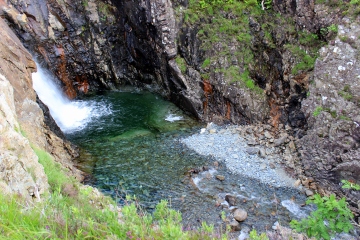 Next, and last, stop of the day in Isle of Skye was Fairy Pools in Glen Brittle. The road to Fairy Pools is also beautiful with huge mountains and grassy fields. As you get closer to Fairy Pools, the road again gets narrow but there are pull off points every few mins so either you or the on-coming car (whichever is closer to the pull off point) can pull over while the other car passes. By the time we got to the parking lot it was mostly empty  so we had no trouble finding a spot. The beginning part of the

hike is the hardest and even that isn’t very tough. There is one section that is a little steep and a little later in the hike you have to cross a stream. There are rocks that you step on to get across and some rocks are a little farther apart but still very easy. After this point, the hike is very easy and flat. The entire hike to the pools and back is supposed to take 4-5 hours and this hike also had no facilities. If you plan on doing the entire hike bring food and water.

To be completely honest, I wasn’t very impressed by Fairy Pools. We ended up turning around after about an hour into the hike. Maybe I was disappointed in this hike because

we came here immediately after Fairy Glen, one of the most amazing, enchanting and awe inspiring places I’ve ever visited. I feel like fairy pools is one of those places that look prettier in pictures than in reality. I think if I had come here first, I would be very impressed but Isle of Skye has so many better and prettier places. There are waterfalls, huge mountains, and “pools” along the way. Overall, the hike we did for an hour was easy and very leisurely. If you are brave enough to take a dive in one of the pools you can, but personally, I found the water too cold, even in July. Overall, I’m glad this was the last hike of the only day we spent in Skye. After about an hour, we turned around and headed back to the car because we didn’t have enough food on us. We wanted to get dinner before all the restaurants on Skye closed for the night.

The breakfast at Duisdale House Hotel included tea, toast, salmon and a few other fish options but their salmon was the best! In fact, salmon anywhere in Scotland was the best salmon I’ve ever had. It made me wonder what exactly we do (or don’t do) in America and why can’t we get such amazing salmon everywhere?! At Uig Hotel, I asked them if the salmon is wild caught or farm raised and they said it’s mostly farm raised. But, the salmon farm is usually only a few miles away. Maybe the reason why salmon is so good in Scotland is because the farm isn’t more than a few miles away so the fish is super fresh?!

At Uig Hotel where we went for lunch after the Old Man of Storr hike we had average tasting mussels, delicious Skye chowder with salmon and haddock, and Scottish venison casserole. For dessert we had sticky toffee pudding flavored ice cream which was nice but the Scottish Cranachan was much better. Overall, the entire meal was very satisfying. One of the most interesting things I had at Uig Hotel was the local Gaelic whiskey. It was very smooth blended whiskey of three different kinds and I ended up buying all of them.

I absolutely LOVED every minute spent on Isle of Skye. I usually do not like going to the same place for vacation but Scotland is definitely a place I plan on visiting again. Especially since the flight from NYC to Scotland isn’t very long.

2 thoughts on “Isle of Skye”

Puffins!!! We got to see them closer with the @har

So-Hi campground is one of my favorite. It's alway

Littleton, NH is a very cute town. It has a typica

Frazer Point was very pretty and peaceful. Before

Acadia Nature Center was magical. It was so green

Pride parade in NYC is the most fun weekend. Espec

Love that view! NYC is returning better and strong

Our first indoor post pandemic outing was to the V

Got some great belated birthday gifts from @marjor

Pine Hill in Ulster County is beautiful. A few mor

My birthday weekend was full of delicious seafood

Lake Placid is beautiful. I can't believe we hadn'