Wind Cave NP is unlike any national park I’ve ever visited. It’s one of the most unique cave system in the world. There is significantly less water in Wind Cave which means there were barely any stalactites and stalagmites. We got to Wind Cave NP around 11:45 am and were hoping to get tickets to the ranger-led tours for noon. Unfortunately the only tickets available were for 3:40 pm Fairgrounds Tour. This gave us enough time to visit the Mammoth Site before returning to Wind Cave for the tour.

I have yet to visit a national park that wasn’t impressive. Wind Cave NP consists of over 28,000 acres of mixed-grass prairie, hills, ravines, and Ponderosa pine forest above a giant cave system. When we entered the park to buy our Fairground tour tickets, we saw a huge herd of bisons and two of them were fighting. One of those bison started to run toward our car and we decided it’s time to keep driving toward the parking lot. Mixed-grass prairie area is also home to many different wildlife like elk, pronghorn, coyote, prairie dogs, and mule deer. Wind Cave area has been protected since 1903 and was the seventh national park.

Fairground tour is about an hour and half long lead by a ranger through paved and lighted walkways through caves. Be prepared to go up and down about 400 steps by the end of the tour. Wind Cave has over 147 miles of known underground passages but they believe there’s probably 1,000 miles of caves underground not yet surveyed. We took the elevator 210 feet below ground and as soon as the ranger opened the door, we knew why it was called Wind Cave.

A little history: In 1881 Jesse and Tom Bingham heard wind coming from a small hole in the ground. The wind blowing was so strong that it blew Tom’s head off. A few days later, Jesse brought some friends to show this phenomenon. This time, Jesse’s hat blew toward the hole in the ground. The wind had changed direction because atmospheric pressure had changed. Strong wind gusts are created by the difference between atmospheric pressure inside the cave and above ground. Once you enter the cave, the temperature is always a constant 54 degree Fahrenheit.

Wind Cave is sacred to American Indians and is believed to be one of the world’s oldest cave. There is very little water in this cave and its the reason why there are very few stalactites and stalagmites. Instead, it has the world’s largest formation of boxwork. About 95% of the world’s boxwork is found in Wind Cave NP. Boxwork is calcite that appear to look like honeycomb. Another unique feature in Wind Cave is Gypsum flowers found in dry caves. Under the right condition, gypsum flowers can look shiny and almost like gems. 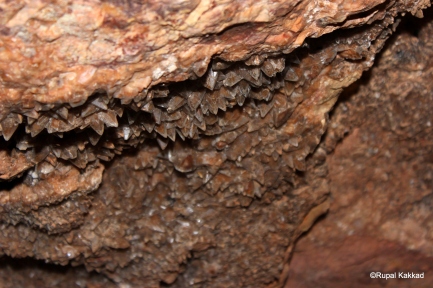 Note: The staff/rangers at Wind Cave NP asks people to not wear shoes, clothing and other items worn at a cave outside Black Hills area in the last 5 years. For the past decade or so White-nose Syndrome has been spreading through bats in US. Over 6 million bats have been killed.

Wind Cave NP is probably one of the most underrated national parks. It definitely deserves more attention and tourism. I couldn’t believe how fast an hour and half flew by. If I visit South Dakota again I would love to go on the candlelight or the wild cave tour, both of which require reservations made 1 month in advance.

For more pictures of my latest travels, follow me on Rupal’s Travel Diaries

Pine Hill in Ulster County is beautiful. A few mor

My birthday weekend was full of delicious seafood

Lake Placid is beautiful. I can't believe we hadn'

Today, Gaurav was craving pooris. I asked if there

I got my shot! And it was over before I knew it. E

It was cold and everything was frozen a few weeken

2020 has been an interesting year to say the least

OMG I love Woodstock, NY. Ulster County is my seco

This tandoori chicken I marinated for over 12 hour

Watching these Sandpiper run towards the water and

First real snow storm in almost 3 years. And it's

Usually we turn Thanksgiving week into a vacation

We've been driving along the Palisades Parkway for

We couldn't help but celebrate this whole weekend.

Drinking started soon after this moment 🍾🥂