Scotch whiskey is an acquired taste. For years, my husband and his friends gave me sips of their scotch drinks hoping I might change my mind. For years, I tried to like it but just found it too strong. Then one year, it happened. A friend gave me a sip of Lagavulin 16 with a little bit of water and I thought “hmmm….this isn’t so bad after all.” After that, I slowly started to drink scotch whiskey more and more and now my preferred drink is single malt scotch, specifically from Islay, Scotland. What make Islay whiskeys unique are the strong smoky and peaty flavors.

So, when we visited Scotland this past summer, it comes as no surprise that we visited three of my favorite distilleries on Islay. Basic tours at most distilleries cost around £5 – £6 and lasts 45 minutes to an hour. At the end of the tour you get a dram of whiskey and you get to keep the dram glass as a souvenir.

The whiskey making process starts with grain barley being soaked for 2 to 3 days so it can germinate and become malt barley. Malt is then dried over peat fire for up to 2 days and then ground coarsely. The amount of peat used in the fire gives each whiskey its own characteristic taste.  Hot water is then added to the coarsely ground malt and the liquid is separated from solid residue. The solid residue is used as cattle feel while the fermentable liquid, maltose, produced is what will eventually turn into scotch. Maltose is then cooled to prevent decomposition before yeast is added. After 36 hours of fermentation, the clear, weakly alcoholic liquid, called Wash, is used for distillation. Wash is essentially barley beer. Distillation takes place in pear shaped, copper pot stills. The wash is distilled in the wash still to produce low wines – an impure, intermediate liquid. Low wines are sent through another round of distillation which produces raw, unmatured whiskey. The angle of the pipe on the top of the still is unique to each distillery and important in the quality of final product. The raw, unmatured whiskey is than put into cask barrels for anywhere from 3 to 25 years to mature and are stored in a cool, dry place. Each year, about 2% of alcohol is evaporated and is called ‘angel’s share’. Once the whiskey is matured, several casks of similar ages from the same distiller will be ‘married’ by vatting them together for few more months before bottling it.

The type of cask used for storing whiskey is also important because it can add unique hint of flavor to the whiskey. Sherry cask and American Oak Bourbon casks are used most commonly because American law prevents bourbon makers from using the same cask twice. Whiskey distillers all over Scotland buy these once-used casks from bourbon makers in America to mature their whiskey and add a hint of the specific bourbon to increase the flavor complexity to their final product. Depending on the quality of the cask, it can be used up to three times before being discarded. 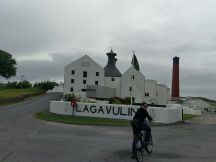 One of the first distilleries we visited in Islay was Lagavulin and the basic tour talked about what changes in the process makes them different from the rest. We got a look through the tanks that contain wash during different level of fermentation. Lagavulin was the only distillery that allowed us to taste the wash before it is distilled.  At the end of the tour we had a dram of whiskey and got to keep the dram glass. This year also happens to be Lagavulin’s 200 year anniversary so they had a video booth for you to record why you like them so much. Photography is not allowed while you walk through the distilleries for their basic tours.

By the end of our first tour, we were starting to get hungry so we headed to the Old Kiln café at Ardbeg distillery. Since we had already been on a basic distillery tour, we decided to try Ardbeg 5 dram tasting along with our lunch. 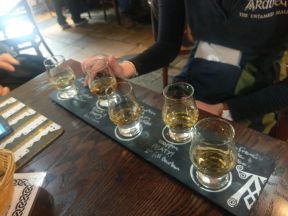 The scotches ranged from 40% alcohol by volume to 57% alcohol by volume. Since we didn’t take the official tour, I didn’t get a dram glass. But I asked the waitress if I could take a dram glass and the response as “as long as it’s only one”. So I got another dram glass as souvenir. The café at Ardbeg is very open and what made the whole experience special is not just the whiskey but the local people on the island. Since the entire islands population is around 3,200 everyone knows everyone. Crime is practically non-existent on the island and the locals will do what they can to answer tourist’s questions, make suggestions, and are genuinely nice and friendly. 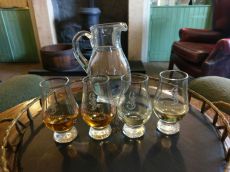 If you are experienced, you may get a mild smell of the oak or sherry. Unfortunately, the smokiness and the peatiness was too overpowering for me to smell anything else.  Then you take a small sip of the scotch as is, without anything mixed in. Then if you choose (and I always do), you can add a wee bit (little bit) of water to open up the flavors. For me, a wee bit of water makes the scotch taste smoother. The one thing they all frown upon is adding ice cubes because as the ice melts, the water content changes. The drink is not consistent from the beginning to the end. They also don’t approve of adding coke, Pepsi or other mixers to single malt scotches.

At Laphroaig distillery, we decided to go for their Flavour Tasting 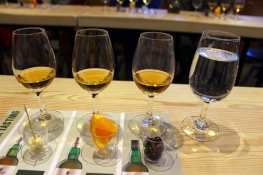 which pairs scotch with small food samples. As soon as you walk in, the staff pours you a dram. While we waited for our Flavour tasting, we walked through their museum. The tasting paired Laphroaig 10 with a small piece of blue cheese, quarter cask with a slice of orange and triple wood with chocolate covered coffee beans. Personally, the only one I liked was the blue cheese pairing. I felt the other food pairings didn’t really add anything to the flavor profile of the scotch. During the tasting we also learned that Laphroaig was able to send whiskey to America legally during prohibition era because they sold it as medicine. Laphroaig whiskey smells especially bad and the distillery has embraced this part of their identity. There is a wall full of things people have said what Laphroaig smells and we got to add our own impression on the wall. As we discussed which bottle to take back to with us, the staff at Laphroaig gave us samples of all the whiskey we were considering.  After about 5 or 6 drams, they asked if I wanted to try anything else. When I said no, the tour guide winked at me and said I haven’t tried their 23 year old whiskey yet and poured me two drams of it. Laphroaig was by far the most generous distillery. It shouldn’t surprise anyone to learn we ended up buying the most bottles of scotches from them.  Another fun and cute thing only Laphroaig offers is an option to plant the flag of your country on a small piece of land once you become friends of Laphroaig. Becoming a friend of Laphroaig was extremely easy and the staff is just so friendly that they won’t care of stop you from planting your flag even if you hadn’t signed up to become a friend.

Since Lagavulin was the first whiskey I sort of liked, it only made sense to back for another visit before leaving the island.

This time we did the Warehouse Demonstration with Ian McArthur, a Lagavulin legend and he also appeared in one of the episode of Parks and Recreation. We tasted 5 different scotches from 12 year old and going all the way to 34 year old. Samples are drawn in front of you from the casks directly in a similar way you would suck gasoline out of a motorcycle. The sample is into a flask first, then into our dram glasses. At the end of the tour, Ian McArthur passes around un-aged whiskey which looks like clear, colorless liquid. As it ages in the wood casks, it changes color slowly over the years. The un-aged whiskey is somewhere around 65% alcohol by volume and smelled like gasoline. I had a very small sip of it and I can say with certainty that I’ll never drink it again. I could feel the heat passing through to my stomach. It reminded me of feni I tried in Goa. On top of everything else, it also ruined the taste of the 34 year old scotch. When Ian McArthur heard me complain about it, he said he’d rather I not end the tour in such bad taste. He gave me another dram of the 34 year old scotch so I could end my stay in Islay on a sweet note. It was also the only tour during which I was allowed to take pictures because all you do is sit in a slightly chilly warehouse, drinking amazing single malt scotches, listening to Ian McArthur talk.

For a scotch lover visiting Scotland is a pilgrimage. I would love to go back sometime and visit the other 5 distilleries on Islay. Besides scotch, Islay also has much more to offer. The island is beautiful, most of the distilleries are located by the sea, and there is so much history.

One thought on “Single Malt Scotch”

This is some of the BEST Indian and Goan food I've

Family from Cali are visiting for the weekend so w

There were SO MANY colorful mushrooms at the Kenne

Every year, for the last 10 years, Gaurav and I th

Puffins!!! We got to see them closer with the @har

So-Hi campground is one of my favorite. It's alway

Littleton, NH is a very cute town. It has a typica

Frazer Point was very pretty and peaceful. Before

Acadia Nature Center was magical. It was so green

Pride parade in NYC is the most fun weekend. Espec

Love that view! NYC is returning better and strong

Our first indoor post pandemic outing was to the V

Got some great belated birthday gifts from @marjor