I never would have picked South Dakota as a 10 day long vacation destination but I’m glad fate took me there. Once my husband found out about the total solar eclipse in January 2017, we had to plan a trip around it. Our initial plan was to go somewhere near Yellowstone or Grand Teton National Parks but we couldn’t find anything within 100 mile radius. Everything in that area was booked since September 2016. We started our search for a place that could accommodate a group of 13 somewhere close to the totality zone. That’s how we ended up at Sunrise Ranch in Edgemont, South Dakota.

We flew into Denver and drove to Edgemont, SD which took us a little over 6 hours because we made a few stops along the way. Most of the drive is very straight and flat as far as the eye can see. It was strangely beautiful. It’s also very easy to end up with a speeding ticket (which I did) because the road is straight, flat and empty. The ranch we stayed at was huge! There were 6 rooms, each with two queen sized beds. The bathroom was hostel style so that was interesting. It’s a good thing we all knew each other well. The ranch had animal heads like bison, antelope, deer and more hanging from the wall.  There were also a few animal skin blankets to

add to the charm. As we became friendly with Mark, the ranch owner, we learned that one of them was made from horse skin. Luckily, they were for decoration only.

For dinner we had two options: a steak house or a place called Hat Creek Grill which serves Mexican food on Friday nights. We were planning on having a lot of steak at the ranch over the weekend so we decided on Mexican food. The restaurant couldn’t seat all 13 of us at one table so we split up into smaller groups and only two people managed to order Mexican food before they ran out of it. The rest of us had to settle for burgers and sandwiches. The Mexican food was surprisingly good (especially the pork plate), something I didn’t expect in a small town in South Dakota.

One of the best things about small towns in the Midwest is how dark it gets at night because there are no big cities near by. We could actually see the milky way, some constellations, planets and even a few shooting stars. It was a perfect night to have a glass of wine, make good use of our binoculars, and stay up late

looking at the night sky.

For years I’ve wanted to try horseback riding at least once in my life. What better place to try it than the wild west! We had arranged for 4 people to go horseback riding at a time. The next morning we met with Hunter, Mark’s son, who taught us the basics of horseback riding and about 40 mins later, we were off exploring the ranch with him. While we tried to improve our skills, the kids were invited to watch Hadley, Mark’s daughter, feed the goats, cows, pigs, chickens, and other animals on the ranch. The kids can either watch or try to help if they felt comfortable. It was a great way for kids to learn about the animals and keep them busy and entertained for the morning. 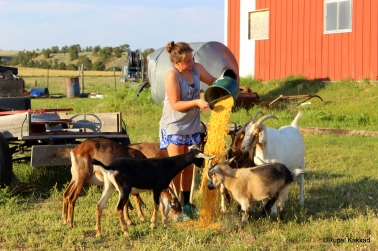 The rest of the day was hotter than expected so we just stayed inside the ranch house, drinking and hanging out. Mark stopped by a few times to talk and we learned a lot about ranching. It just never occurred to me that there’s so much science behind operating a ranch. In the evening, we walked around a bit and it was time to feed the goats again. They are very friendly creatures and definitely not

afraid of people. Many of them walked right up to us hoping we would have some food. Hadley got a bucket full of food for them and we got to feed and pet the goats. I’ve never been quite so close to goats before so it was interesting to have them eat from my hands. A part of me was very afraid they’ll bite my hand off but Hadley assured me goats don’t do that. Once the heat got the better of us, we went back inside for some much needed shade and a few drinks.

For dinner we had asked Mark for the chuck wagon dinner. Normally he cooks it outside

but since it was so hot, it was cooked in his home. He brought out the cooked food outside and it was served on the back of a chuck wagon. It was starting get cooler outside so once again, we ventured out of the ranch house. While Mark and his wife, Suzanne, were preparing/heating the dinner we watched the sunset. Hadley was giving milk to one of the baby cows using what looked like a milk bottle used for babies except much larger (see pic). We again learned about cow grazing and how to maintain summer and winter pasture and so much more. Cow grazing is not as simple as it sounds.

Dinner included roast beef with dry aged beef, beans, potatoes, and biscuits served in the back of a chuck wagon. All the meat was from his ranch and usually freshly butchered so it’s no surprise that everything tasted delicious. The beef was tender and juicy. The biscuits were moist and soft. The beans and potatoes were cooked just perfectly. We had also requested a birthday cake for two 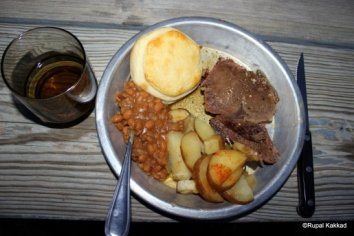 people whose birthdays were coming up. Suzanne did an amazing job baking vanilla and chocolate cupcakes and arranged them in the shape of a horse. (We also purchased freshly made pork sausages for breakfast and of course, they were delicious) After dinner, Mark let us borrow his spotting scope and we were able to see the rings of Saturn! That was probably one of the coolest things I’ve been able to see. It was a little windy at night so trying to keep the scope stead was a bit difficult but we eventually managed. South Dakota was one of the best places we’ve visited for observing the night sky.

The next day we planned on visiting Mount Rushmore and Custer state park.

Mammoth Site – nerdiest thing to do on a vacation

Once in a lifetime experience

The entire Mexico trip plan was to walk until we g

One of our first meals in Mexico City was at Azul

We visited a textile shop in Oaxaca. They use trad

Even the hamburger from a random street stall is s

One evening in CDMX, we decided to watch Lucas Lib

I've said it before and I'll say it again. There's

El Tule is the widest tree in the world. It's over

Whatever you want you'll find at Benito Juarez mer

Oaxaca is such a cute little town. #oaxaca #oaxa

We were hoping to spend the day on #ourwawar but i

Fall colors this last weekend in the Hudson Valley